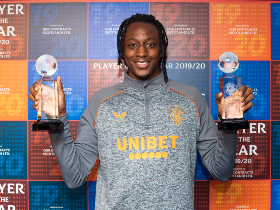 Glasgow Rangers fan Ross Bennett is of the opinion that Joe Aribo is a victim of his versatility because he has been tried in several positions by manager Steven Gerrard since transferring to the Scottish Premiership giants from Charlton Athletic.
Aribo's natural position is playing as a central midfielder but his offensive and defensive qualities have seen him deployed at left-back, right winger, right midfield, defensive midfielder and attacking midfielder.
In his debut season in Scotland, the Nigeria international could not be ignored for selection due to his ability to play in several positions, making 48 appearances in all competitions.
In the latest edition of Gersnet podcast, Bennett was quoted as saying by This Is Futbol : "Aribo, in a way, sometimes is kind of a victim of his own versatility because he’ll be asked to fill in here and there – wherever he’s needed.

"We’ve seen him playing left-back because we needed him to, we’ve seen him play more defensive midfield and breaking up play and intercepting passes when we need him to.
"So, he’s a bit of a victim in a way because he’s not always going to be given that top of the diamond, free rein kind of role which he clearly enjoys playing."
Aribo was included in the first ever Whoscored Scottish Premiership Team of the Week after his outstanding performance in Rangers' 1-0 win at Aberdeen on the opening day of the season.
Igho Kingsley
Photo Credit : rangers.co.uk
Copyright ANS