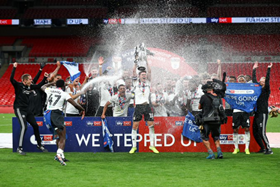 The next time Fulham play a league game in September, they will be a Premier League side courtesy of their hard-fought 2-1 win against Brentford in the Championship playoff final on Tuesday night at Wembley, allnigeriasoccer.com reports.
Today's game was dubbed the richest game in football, with the winner Fulham set to earn £135m (N79 billion in Nigerian currency) in additional revenue over the next three seasons, while Brentford would have collected £160m assuming they earned promotion via the playoffs for the first time in nine attempts.
Former Tottenham Hotspur starlet of Nigerian descent, Josh Onomah who joined the Cottagers on a permanent deal last summer, was named in the starting lineup and lasted 110 minutes on the pitch before he was substituted.
The 2017 England U20 World Cup-winning midfielder was the first Fulham player to test the Bees goalkeeper David Raya but saw his shot from distance saved by the Spaniard in the fourth minute.
And six minutes later, Onomah was almost presented an opening after a mix up at the back but Brentford cleared their lines and came close to breaking the deadlock again in the 17th minute but his shot was saved again.
The two London teams could not be separated at the end of ninety minutes so the final headed into extra-time.
Left-back Joe Bryan with a spectacular free-kick opened the scoring in the 105th minute, then sealed the win with a lovely right-footed finish in the 117th minute before Dalsgaard netted a consolation with almost the last kick of the game.
Onomah, 23, played thirteen games for Tottenham Hotspur in the Premier League before joining Fulham.
Ifeanyi Emmanuel
Photo Credit : fulhamfc.com
Copyright ANS