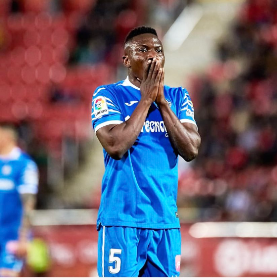 European football administrative body UEFA have confirmed the final Europa League squad changes ahead of the resumption of the competition on Wednesday.

All clubs were permitted to register up to three new eligible A list players by midnight CET on Monday 3 August, provided players must have been already registered and eligible to play for the club at domestic level since 3 February or in any case by no later than before the first leg of the round of 16 as initially scheduled for the relevant team.

Getafe who take on Inter Milan in today's round of 16 star match have added Super Eagles star Oghenekaro Etebo to their roster.


However, the Stoke City-owned midfielder will not play a part against Victor Moses's team because he is trapped in Nigeria due to the coronavirus pandemic.
Nigeria U23 captain Azubuike Okechukwu will not be available for selection when İstanbul Başakşehir F.K take on Danish giants FC Copenhagen as he has been de-registered by the Turkish Super Lig champions.
Liverpool-owned winger Sheyi Ojo, who was loaned out to Glasgow Rangers for the entirety of the 2019-2020 season, has returned to his parent club and is no longer eligible to represent the Light Blues in the competition.
Summer signings Leon Balogun and Calvin Ughelumba were not Rangers' players when the first leg of the round of 16 was initially scheduled, so will not be involved against Bayer Leverkusen on Thursday.
Ifeanyi Emmanuel
Copyright ANS