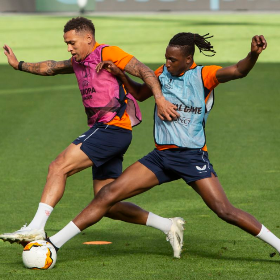 Super Eagles midfielder Joe Aribo has been included in Glasgow Rangers provisional squad list for their Europa League round of 16 second leg clash against Bayer Leverkusen at the bay Arena on Thursday evening, allnigeriasoccer.com reports.
Aribo was pictured training with the Light Blues in Germany on Wednesday under the guidance of Liverpool legend Steven Gerrard.
International teammate Leon Balogun and new signing from Leicester City Calvin Bassey are not eligible to play in the Europa League because they were not Rangers players when the first leg was staged on March 12.
Bayer Leverkusen are the favourites to advance to the quarterfinals, having won the first leg at Ibrox 3-1, with Aribo lasting 53 minutes on the pitch.
Having said that, scoring two goals without conceding could swing the result in the favour of the Scottish Premiership side.
Including the qualifying rounds, Aribo has featured in 14 matches in this season's Europa League and got on the scoresheet against St Joseph's FC, FC Progrès Niederkorn, FC Midtjylland and Sporting Braga.
Ifeanyi Emmanuel
Photo Credit : rangers.co.uk
Copyright ANS