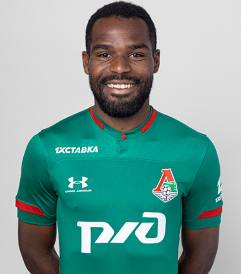 According to reporting by Championat, Russian Premier League newcomers FC Khimki are interested in signing Saint Petersburg-born Super Eagles fullback Bryan Idowu in the summer transfer window.
FC Khimki are considering signing the Nigeria international on loan from Lokomotiv Moscow.
Idowu's playing opportunities since he joined the Muscovites have been few and far between, with only 11 starts in the Premier League from a possible 60.
As a result, his progress with the Nigerian National Team has been derailed as he is now behind Ola Aina, Jamilu Collins, Shehu Abdullahi and even Chidozie Awaziem in manager Gernot Rohr's pecking order of fullbacks.
Idowu's name was on everyone's lips in the months leading up to the 2018 World Cup after netting eight minutes into his debut against Argentina in a friendly held in his country of birth.
He has represented only Russian clubs in his career, having his footballing education at Smena-Zenit and Zenit St. Petersburg, before going pro with Amkar Perm.
Idowu has a contract with Lokomotiv Moscow until the end of the 2020-2021 season.
Ifeanyi Emmanuel
Photo Credit : fclm.ru
Copyright ANS