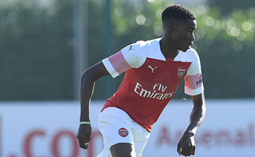 Allnigeriasoccer.com can exclusively report that highly talented Nigerian teenager Ryan Alebiosu has ended speculation about his future by signing a new contract with English Premier League side Arsenal.
Arsenal's retained list published by the Premier League in late June showed that the Hale End Academy product was among the players offered fresh terms by the Gunners.
Although Alebiosu has recently been spotted training with the U23 squad, there is no official word yet from the Emirates outfit whether or not he accepted the offer.
It is understood that the 18-year-old has signed his first professional contract, a two-year deal, with Arsenal holding an option to extend by a further two years.
Alebiosu joined Arsenal at the age of seven after he was spotted by a scout while playing for his local club Lyndhurst.
He has been tested in a number of positions by the youth team coaches, including right winger, right back and right wing-back.
According to Alebiosu, he models his game after former Arsenal star Alex Iwobi when he plays on the wing.
Ifeanyi Emmanuel
Photo Credit : arsenal.com
Copyright ANS