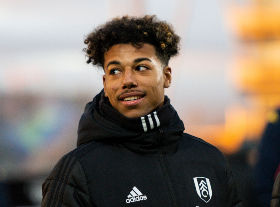 Fulham's Nigerian prospects Sylvester Jasper, Michael Olakigbe and Idris Odutayo won't be making their debuts in the prestigious UEFA Youth League next season despite the Cottagers crowned U18 Premier League South champions for the 2019-20 campaign, allnigeriasoccer.com reports.
Manchester City, winners of the U18 Premier League North, were crowned overall champions of the division after the Premier League decided to use a a points per game system.
While the Citizens accumulated 55.6 points, Fulham finished with 51.8 points, and are one of England's four representatives in the UYL, the others being Liverpool, Manchester United and Chelsea.
Assuming the national playoff final went ahead and Fulham managed to beat Manchester City, it would have been the first time in their history to have qualified for the UEFA Youth League.
Jasper appeared in 13 matches for Fulham U18s in the curtailed academy season, scoring 6 goals; Olakigbe played 3 games and netted once; Odutayo featured in 17 games with one goal to his name from his fullback position.
Last season, the highly talented Jasper, 18, made two appearances off the bench for Fulham in the Championship and played against Manchester City in the FA Cup.
Ifeanyi Emmanuel
Photo Credit : fulhamfc.com
Copyright ANS