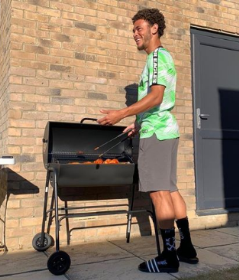 Championship outfit Queens Park Rangers are working on a deal to sign Nigerian midfielder Luke Amos on a permanent basis from Tottenham Hotspur.
According to talkSPORT, the Hoops are confident of sealing a summer deal for Amos who spent the whole of last season on loan at the ‎Kiyan Prince Foundation Stadium.
It has been suggested that Queens Park Rangers are in pole position to sign the Tottenham Hotspur Academy graduate but have to see off competition from Championship rivals Middlesbrough.
The 23-year-old had a successful loan spell at the London club, making 35 appearances across all competitions and was on target twice, against Barnsley in December.
Amos's form has led to speculation that he could be summoned to the Super Eagles sooner rather than later, with manager Gernot Rohr admitting that he's keeping tabs on the good Nigerian players in Queens Park Rangers without revealing their identities.
Welwyn Garden City-born Amos joined Tottenham Hotspur at the age of nine and is contracted to the north London club until June 2021
Igho Kingsley
Copyright ANS