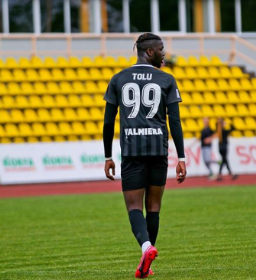 Former Golden Eaglets invitee Tolu Arokodare continued his scoring spree in the Latvian top division by netting his first career hat-trick as Valmiera registered a 3-2 road win against Tukums on Friday evening, allnigeriasoccer.com reports.
The 2000-born striker has been in the best form of his career in the 2020 season, netting in five consecutive matches (June 25 to July 13) and has found the net in each of his last three games in the Virsliga.
And no wonder European clubs such as Toulouse, Angers, Amiens, RSC Anderlecht and Slavia Prague are monitoring the progress of the 19-year-old ahead of a possible swoop for his services.
Against Tukums, Arokodare opened the scoring in the 5th minute and with his team trailing 2-1, he equalised in the 62nd minute before grabbing the winning goal at minute 90.
Prior to his maiden hat-trick as a professional, he attempted bagging a treble in four matches after scoring a brace without being successful, in matches against Liepaja and Spartaks Jurmala last season, then RFS and Ventspils this term.
It goes without saying that Arokodare is topping the Virsliga goalscoring chart with 12 goals from 13 starts.
Ifeanyi Emmanuel
Photo Credit : instagram.com/t.e.a.99._
Copyright ANS