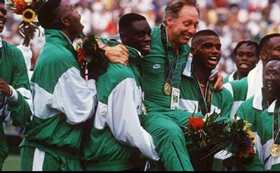 The manager of the all conquering Nigerian Under 23 Football team which won Africa's first ever Olympic football gold medal, Johannes Bonfrere has revealed exclusively to BCOS TV that he is yet to collect his own medal.
Featuring on the BCOS TV sports programme anchored by Boluwaji Ogunmola and produced by Adewale Tijani, SBS Show, Bonfrere Jo claimed he was not given the gold medal won at the Atlanta Olympics in 1996, on the excuse that his was not available.


"I have not been given the Olympic gold medal we won in 1996.  After we celebrated our victory over Argentina at the final, I was prevented from climbing the podium to receive my medal.
"They said mine was not available. I was annoyed and refused to return with the team to Nigeria. I went to Holland instead", Jo Bonfrere stated.
The former Dream Team and Super Eagles Manager also disclosed that the piece of land promised to the team by Federal Government as parts of rewards for their feat is yet to be given to him twenty four years after his achievement.

The Dutch tactician, who is now residing in his home country, lamented on the bad treatment meted to him after leading Nigeria to the glorious outing in the U. S.

"It's unfair that after bringing glory to Nigeria, I was denied of my rewards", he said sadly.

In spite of his bitter experience in Nigeria, Bonfrere Jo was however full of admiration for Nigerian teams whom he said were very talented and easy to manage.