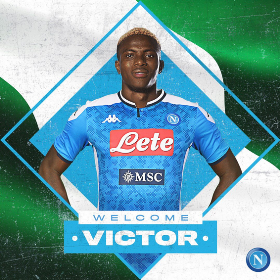 According to Victor Osimhen, himself, he watched Saturday evening's UEFA Champions League clash between Barcelona and Napoli at the Camp Nou, allnigeriasoccer.com reports.
Just before the game started, a Napoli fan asked him via Twitter if he would watch the match and the Nigerian responded in Italian, 'Yes'.
With Napoli failing to progress to the quarterfinals, it means Osimhen won't be featuring in the Champions League next season but the Europa League as the Blues are one of Italy's representatives in the competition by virtue of winning this year's Coppa Italia.
A Barcelona team inspired by Argentina superstar Lionel Messi reached their thirteenth consecutive Champions League quarterfinal after beating Napoli 4-2 on aggregate over two legs.
Clement Lenglet broke the deadlock after ten minutes, Messi fired a shot past goalkeeper Ospina to make it 2-0 and won a penalty converted by Luis Suarez just before half-time, before Lorenzo Insigne reduced the arrears from the spot.
With the exception of Lille's dead rubber matchday six tie against Chelsea at Stamford Bridge, in which he was a non-playing substitute, Osimhen started all the matches played by the Ligue 1 team in this season's Champions League.
The 21-year-old Super Eagle is set to make his debut in the Europa League as Napoli have been guaranteed a spot in the group stage next season.
Ifeanyi Emmanuel
Copyright ANS