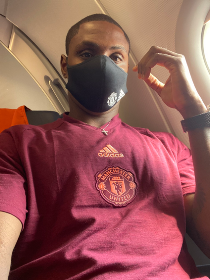 Former Nigeria international Odion Ighalo is in the frame to feature for Manchester United when they tackle FC Copenhagen in a winner-take-all Europa League quarterfinal tie at the RheinEnergieStadion (Köln) on Monday evening, starting from 2000 hours, allnigeriasoccer.com reports.
The Shanghai Shenhua loanee was in the traveling party that left Manchester on Sunday morning.
Two of Ighalo's rivals for a starting spot in attack in the shape of Mason Greenwood and Marcus Rashford are confirmed to have traveled with the squad.
The Nigerian has started each of the last three games contested by Manchester United in the Europa League - Club Brugge (h) and the home and away legs against LASK - but it remains to be seen if he's included in the starting XI vs FC Copenhagen.
Victory over the Danish Superliga powerhouse would see the Red Devils face either Wolverhampton Wanderers or Sevilla in the semifinal to be staged next weekend.
Jose Mourinho, now coaching Tottenham Hotspur, guided Manchester United to win the Europa League in 2017.
Igho Kingsley
Copyright ANS