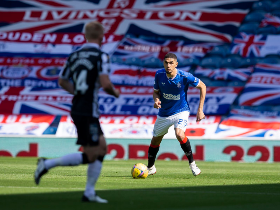 Rangers B Team coach Kevin Thomson has named Super Eagles star Leon Balogun as his standout player in the 3-0 win over St. Mirren at Ibrox Stadium on Sunday afternoon.
The Light Blues, managed by Liverpool legend Steven Gerrard, kept a clean sheet, and Balogun's form in defence has been admired by Thomson.
Rangers are one of the two teams yet to concede in the new Scottish Premiership season and as a result they are second in the table with six points, only because Hibernian who have an identical goal difference have scored more goals.
"Solid performance, on to Wednesday now, just need to keep winning. Thanks for having me @RangersTV was great to be on with the legend @CliveTyldesley look forward to going again Wednesday ⚽️😎 balogun top man for me today, cantered through it. @RangersFC," Thomson, an ex-Rangers player, posted on Twitter after the game.
Despite missing a large chunk of pre-season training, Balogun began his Rangers career as one of the fittest players in the squad as he was active for his past club Wigan Athletic in the month of July.
The 32-year-old has signed a one-year deal with the 54-time Scottish top-flight champions.
Ifeanyi Emmanuel
Photo Credit : rangers.co.uk
Copyright ANS