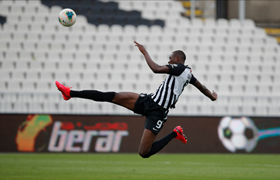 Former Nigeria U23 international Umar Sadiq opened his goalscoring account for the 2020-2021 season as Partizan Belgrade thrashed Javor Ivanjica 4-0 on Sunday night, allnigeriasoccer.com reports.
The in-demand frontman was unable to find the net in his first two matches of the new season against Napredak and Novi Pazar, but it was worth the wait as one of his goals today was very impressive.
Sadiq opened the scoring in the 13th minute and made it 2-0 with the pick of the goals five minutes later after a goalkeeping error from Dorde Lazović.
The Javor Ivanjica goalkeeper failed to deal with a high ball into the box, allowing Sadiq to backheel the ball into the net and the strike was reminiscent of Cristiano Ronaldo's brilliant finish against Rayo Vallecano in February 2012.
Javor Ivanjica are his favourite opponents since his arrival at Partizan on an initial loan deal from Roma before the move was made permanent in the winter transfer market.
Including his hat-trick in November 2019, the Rio Olympics bronze medalist has now netted five goals against the club based in Ivanjica - 35.7 percent of his goals in the Super Liga.
Ifeanyi Emmanuel
Photo Credit : FK Partizan
Copyright ANS