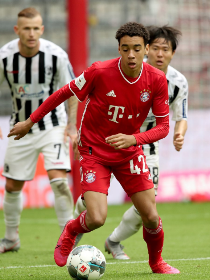 Bayern Munich coach Hans-Dieter Flick selected a 27-man squad to travel to Lisbon in Portugal ahead of their eagerly anticipated UEFA Champions League quarterfinal showdown with Barcelona at Estádio do Sport Lisboa e Benfica on Friday evening, allnigeriasoccer.com reports.
The traveling party to Lisbon contained two attack-minded players of Nigerian descent in the shape of Chelsea Academy product Jamal Musiala and ex-Feyenoord youth-teamer Joshua Zirkzee.
A Netherlands U19 international, Zirkzee's name was erased from Bayern Munich's List A to make room for one of the promising academy players, including Musiala.
Although the 2003-born Musiala is an U21 player, he is not qualified to be named to the List A simply because he has not spent up to two years with Bayern, having joined from Chelsea last summer, whereas Zirkzee is in his third year with the Bavarians.
There had been doubts over the fitness of Zirkzee after he missed the 4-1 win over Chelsea this past weekend through a foot injury but it appears he's not seriously injured as he has been included in the squad list.
The winner of the Barcelona vs Bayern Munich clash will face either Manchester City or Lyon in the seminal scheduled to take place on August 19.
Ifeanyi Emmanuel
Copyright ANS