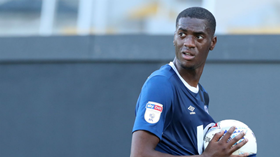 Manchester City central defender of Nigerian parentage, Tosin Adarabioyo is attracting interest from Everton, according to reports in the English press.
The Boot Room citing the print edition of the Mirror says the Toffees are weighing up a summer move for the former England youth international.
Everton finished the 2019-2020 season with a negative goal difference largely due to the fact that they conceded so many goals, 56 in total in 38 games, and manager Carlo Ancelotti is looking to bolster his defence.
Adarabioyo has been identified as a cheaper alternative to Chelsea's Kurt Zouma and Aston Villa's Tyrone Mings.
The 22-year-old Anglo-Nigerian has been struggling for minutes ever since he was promoted to Manchester City's first team and had to be farmed out on loan to West Brom and Blackburn Rovers in the last two seasons.
Should Everton sign Adarabioyo, he'd join Super Eagles playmaker Alex Iwobi and Dennis Adeniran at Goodison Park.
Igho Kingsley
Photo Credit : rovers.co.uk