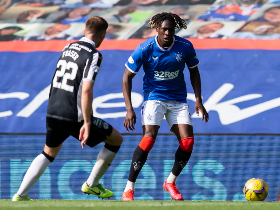 Former Chelsea youth-team coach Michael Beale has congratulated Italian-born Nigerian defender Calvin Bassey on making his professional debut for Glasgow Rangers.
The left-back, with the number 3 on the back of his shirt, was handed a run-out for the final eleven minutes of Glasgow Rangers 3-0 win against St Mirren on Sunday afternoon.
The summer signing from Leicester City featured in some pre-season games for Steven Gerrard's team but the match against St. Mirren was his first official game for the club.
Beale, a first team coach at Rangers, has predicted that Bassey will get more playing opportunities as the season progresses, something that he was not offered at Leicester City.
Taking to Twitter to celebrate his debut, Bassey said : "Professional debut @RangersFC 🙏❤️".

Beale retweeted and commented : "Many more to come - congratulations @CalvinBassey 👏👏👏".
The 20-year-old Bassey is currently behind Croatia international Borna Barišić in the pecking order of left-backs at Rangers.
Ifeanyi Emmanuel