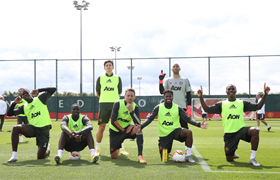 Retired Nigeria international Peter Ijeh, who won the Danish league title with FC Copenhagen in the 2005-2006 season, has predicted that the Scandinavian powerhouse will lose to Manchester United when both clubs face off in a Europa League quarterfinal clash at the RheinEnergieStadion (Köln) on Monday evening.
Ijeh is backing the Red Devils to secure a win because they are in great form at the moment and they have the influential French World Cup winner Paul Pogba in their ranks.
"I don't think FC Copenhagen have a chance because currently Manchester United are in great form and in the previous games they played well. They have found their rhythm back," Ijeh told allnigeriasoccer.com.

"The input of Paul Pogba in the team is very, very important because with what I can see he has great influence on the pitch and out of the pitch, so his performance will see Manchester United through."
Ijeh admitted that Odion Ighalo's knowledge of Scandinavian football, having spent a year at Lyn Oslo before switching to Udinese, might come in handy but he does not see the 2019 Africa Cup of Nations top scorer starting today, with Solskjaer expected to name a very strong squad.
"Ighalo knows Scandinavian football but the match today against FC Copenhagen, Manchester United need the match more than the Danish team.

"Ole Gunnar Solskjaer will play his first team. Martial is in top form, I think Odion Ighalo is the third choice striker.

"We'll see how he rolls out his team for today but so far Ighalo has been doing good, but he has to do more with his playing time, so he has to decide whether to continue with the club or return to China," Ijeh concluded.
Ighalo played a starring role as Manchester United thrashed Austrian opponents LASK 5-0 in March and retained his spot in the starting lineup in the last sixteen, second leg on August 5.
Ifeanyi Emmanuel
Copyright ANS