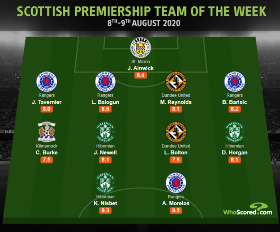 Glasgow Rangers summer signing Leon Balogun has been named to the Scottish Premiership Team of the Week following the conclusion of the matchday two fixtures.
Football statistics website Whoscored.com has unveiled a ceremonial starting lineup containing the most outstanding players in the last round of matches, with the Nigeria international picked as one of the two central defenders.
Balogun earned rave reviews for his performance against St. Mirren, helping goalkeeper Jonathan McLaughlin to post a shutout in back-to-back matches.
Of the eleven players named in the Team of the Week, the Rangers number 26 was the third best ranked player with a rating of 8.5, behind Hibernian center forward Kevin Nisbet (9.3) and Rangers' Alfredo Morelos (9.2).
Against St. Mirren, Balogun dominated the strikers he faced, including Nigerian Jonathan Obika, winning a game-high seven aerial duels, made a joint game-high five interceptions and a team-high three clearances.
The former Wigan Athletic and Brighton & Hove man was accurate in 91.2 percent of his passes, made one dribble and two tackles.
Igho Kingsley
Copyright ANS