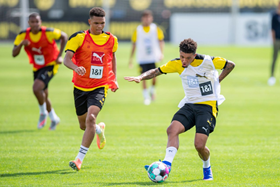 Nigeria-eligible central defender Nnamdi Collins has been called up to Borrusia Dortmund first team as they start preparations for the upcoming season, allnigeriasoccer.com reports.
Aged 16, Collins was among the 31 Dortmund players, including Jadon Sancho, Manuel Akanji and Erling Haaland, that arrived in Bad Ragaz, where they are holding their summer training camp for the tenth time, informs the official website of Borussia Dortmund.
Collins wasn't the only youth-teamer named in the traveling squad, with Youssoufa Moukoko, 15,  and Ansgar Knauff, 18, also part of the group.
The Düsseldorf-born youngster took part in Dortmund's first training session on Monday afternoon upon their arrival in Switzerland.
Collins being selected by first team manager Lucien Favre for the pre-season training camp is a testament to the progress he has made in his career over the last one year as he has yet to make his competitive debut for the U19 team.
Last season, the Germany U16 captain scored an impressive 4 goals in 21 appearances in the B-Junioren Bundesliga West.
Collins joined Borussia Dortmund from the youth team of Fortuna Düsseldorf in the summer of 2016.
Ifeanyi Emmanuel
Photo Credit : derwesten.de
Copyright ANS