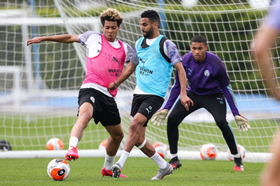 Two Nigeria-eligible teenagers have been summoned to Manchester City's first team for the UEFA Champions League last-eight mini-tournament taking place in Lisbon, allnigeriasoccer.com reports.
Goalkeeper Gavin Bazunu, 18, and Felix Nmecha, 19, were included in the 27-man squad that landed in Portugal on Monday, ahead of Saturday's meeting with Olympique Lyonnais.

Republic of Ireland U21 international Bazunu joined Manchester City in 2019 and was recently added to City's List A for the Champions League as a replacement for Leroy Sane who transferred to Bayern Munich.
As for German-born midfielder Nmecha, he meets the requirements to be named to the List B as he was born after January 1, 1998 and has been eligible to play for Manchester City for any uninterrupted period of two years since his 15th birthday.
The two teenagers have been spotted several times training with the first team of the Citizens since the resumption of football activities in England in the wake of the coronavirus pandemic but were not utilized by Guardiola for the Premier League and FA Cup fixtures, and the recent win against Real Madrid.
Last season, Nmecha was on the bench as City beat TSG Hoffenheim 2-1 in the Champions League, before making his professional debut against Burton Albion in the League Cup.
Ifeanyi Emmanuel
Photo Credit : Manchester City/Getty Images/M.E.N
Copyright ANS