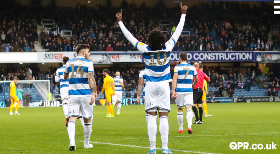 England U21 international of Nigerian descent, Eberechi Eze wants to return to his boyhood club Arsenal.
According to Sky Sports reporter Kaveh Solhekol, the Queens Park Rangers playmaker grew up supporting the Gunners so his dream move would be to the Emirates Stadium.
Allnigeriasoccer.com understands that Eze and his Hoops teammate Bright Osayi-Samuel were scouted by Arsenal in the recently concluded season.
Arsenal's London rivals Crystal Palace as well as West Ham have both been credited with an interest in the Queens Park Rangers Player of the Year following a breakout season that saw him score 14 goals and set up eight others in 46 starts in the Championship.
Eze spent his formative years as a footballer with the youth team of Arsenal but was released at the age of 13.
The clubs interested in signing the 22-year-old must meet QPR's asking price of 20 million pounds for the Anglo-Nigerian.
He has a contract with Queens Park Rangers until the end of next season.
Ifeanyi Emmanuel
Photo Credit : qpr.co.uk
Copyright ANS