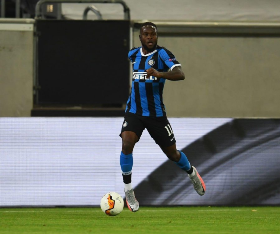 Chelsea loanee Victor Moses has taken to social media platform, Instagram to celebrate Inter Milan's 2-1 victory over Bayer Leverkusen in the quarterfinal of the 2019-2020 Europa League at the Merkur Spiel-Arena.
Nicolo Barella opened the scoring 15 minutes into the game, ex-Manchester United and Chelsea striker Romelu Lukaku doubled the advantage 21 minutes in, before Kai Havertz halved the deficit.
Moses started on the bench for the Nerazzurri but came on to replace Danilo D'Ambrosio just before the hour mark, taking his total appearances in the competition to 13 since he debuted seven and a half years ago.
The 29-year-old was one of the standout players for Chelsea as they won the Europa League in 2013, scoring four goals in five starts and played two games for the current holders last season, before heading to Fenerbahce for a loan spell.
The 2013 Africa Cup of Nations winner posted : "Semi-Final #EuropaLeague #alwaysbelieve"
Moses and his Inter Milan teammates will face either Shakhtar Donetsk or Basel in the semifinals on August 17.
Igho Kingsley
Copyright ANS