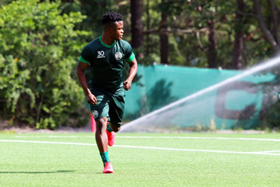 Allnigeriasoccer.com understands that Akinkunmi 'Little Messi' Amoo completed his first training session as a professional player of Hammarby on Tuesday, August 11.
Hammarby chief scout Mikael Hjelmberg monitored the former Nigeria U17 sensation at close quarters during the workout and sent back glowing reports to the sporting director of the Stockholm based club about the potential of the winger cum attacking midfielder.
The Hammarby players were not over-tasked in yesterday's session because they have a league game against IFK Norrköping on Thursday, August 13.
Hjelmberg told the sporting director that Amoo 'looked really good' in the small possession game, his teammates love him and gave him the ball often, and highlighted that the Nigerian is 'great in combination play'.
On the flip side, the talent spotter admitted that Hammarby have to work on Amoo's physiques to get his stamina up a little bit ahead of a professional debut for the youngster.
Hammarby have a pre-game session today before their trip to östgötaporten, where they face Norrköping tomorrow, starting from 1800 hours.
Ifeanyi Emmanuel
Copyright ANS