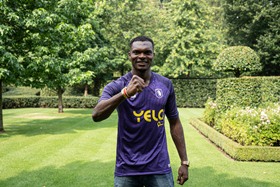 Blessing Eleke's move to Beerschot is in the bag, with the Belgium First Division A newcomers confirming his signing on Wednesday morning.
The 24-year-old ended his association with Swiss club FC Luzern after putting pen to paper on a three-year deal with Beerschot.
Eleke departs FC Luzern after 22 goals in 72 appearances spread across two seasons and also featured in the qualifying rounds of the Champions League and Europa League.
In his first words as a player of Beerschot, he told the club's official website : "I want to make everyone happy and proud with my goals.
"I also want to score a lot for Beerschot and I am delighted that I can continue to grow at a club like Beerschot, in a city like Antwerp.
"Of all the offers I had, this was the best for me. I get better every year and I want to push it to the limit."
The Flying Sports Academy product had stops with teams in Slovenia and Israel before joining FC Luzern in July 2018.
Ifeanyi Emmanuel
Copyright ANS