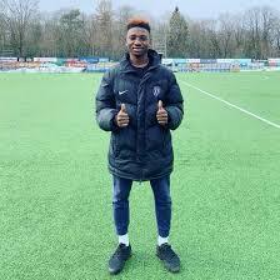 Allnigeriasoccer.com can exclusively report that English Premier League side Manchester City are keeping tabs on highly-rated Nigerian winger Wale Musa Alli, with a view to a transfer in future.
Alli currently plies his trade for Austrian 2.Liga side SKU Amstetten, whom he joined from Estonian outfit Kalev Tallinn in February 2020.
Manchester City talent spotters scouted the promising teenager several times during his time in Estonia and have also asked for a second opinion on the player.
Tipped as one for the future, he was involved in 14 goals (10 goals, 4 assists) from 35 matches for Kalev Tallinn, including a hat-trick against JK Volta II, and has already opened his goalscoring account for his Austrian club.
According to a City scout, Alli possesses all the characteristics they are looking for in a winger and has been likened to England star Raheem Sterling due to his playing style and small stature.
The 19-year-old is fast, strong, changes direction with ease, draws a lot of fouls and has excellent movement with or without the ball.
Alli has a contract with SKU Amstetten until the end of the 2021-2022 season.
Ifeanyi Emmanuel
Copyright ANS