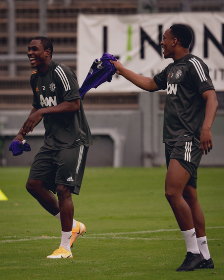 Allnigeriasoccer.com understands that reports at home and abroad linking Odion Ighalo with a summer transfer to French champions Paris St. Germain are wide of the mark.
What didn't add up in the first place was suggestions that PSG sporting director Leonardo was in talks with a representative of Ighalo, Jean-Willy Ngoma a Democratic Republic of Congo agent, who has no ties with the striker's bona fide agency.
It is understood that Ighalo and his camp have had no contact whatsoever with Paris St. Germain over a transfer both now and in the future.
The bottom line is that the former Nigeria international is not interested in moving to PSG because he is already playing for his dream club Manchester United and transfer talks never happened.
Ighalo is currently with the Manchester United squad in Cologne, Germany preparing for their Europa League showdown against one of the most successful teams in the tournament, Sevilla and took part in Thursday's workout.
The 31-year-old has a contract with the Red Devils until January 30, 2021 and does not plan to jump ship this summer.
Ifeanyi Emmanuel
Copyright ANS