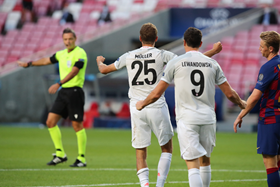 Joshua Zirkzee and Jamal Musiala were unused substitutes for Bayern Munich as the German champions completely mauled Barcelona 8-2 to reach the semifinals of the Champions League on Friday night, allnigeriasoccer.com reports.
Bayern manager Hans-Dieter Flick brought on Lucas Hernandez and Corentin Tolisso - the fourth and fifth substitute -  for the final six minutes, a decision that meant the two Nigeria-eligible players would not be utilized against the  Catalonia side.
Barcelona's humiliation all started when Thomas Muller opened the scoring four minutes in, but the lead lasted only three minutes as David Alaba sent the ball into his own net.
The Bavarians had a three-goal buffer at the end of the first half with Ivan Perisic, Serge Gnabry and Muller getting on the scoresheet.
Luis Suarez gave Barcelona hope when he scored a brilliant goal in the 57th minute, only for Joshua Kimmich to restore Bayern's three-goal advantage six minutes later.
Robert Lewandowski eventually got in on the act at minute 82 before a brace from Barcelona loanee Philippe Coutinho ensured manager's Quique Setien's time at the Camp Nou is all but over.
Ifeanyi Emmanuel
Photo Credit : fcbayern.com