Subscribe
'It's The End Of A Generation For Barcelona' - Ex-Blaugrana Star Amunike Reacts To Bayern Defeat
Published: August 14, 2020 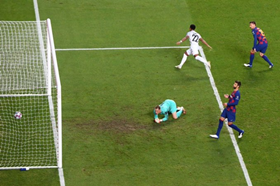 Retired Nigeria international Emmanuel Amunike was understandably disappointed after his former club Barcelona suffering a humiliating 8-2 loss to Bayern Munich on Friday evening, the first time they have conceded eight goals in a single match since 1946.
Amunike has concluded that the Blaugrana were disgraced today because they have an ageing squad and has urged the leadership of the Catalonia side to revamp the squad ahead of the upcoming season.
Of the eleven players named in Barcelona's starting line-up for the Champions League clash vs Bayern Munich, six have passed the age of 30 - Pique (33), Jordi Alba (31), Arturo Vidal (33), Sergio Busquets (32), Lionel Messi (33) and Luis Suárez (33).
"I don't understand this Barcelona team but this is football, we need new renovation in the team," Amunike said.

"The Bayern team are well-organized, they have clear ideas what they are playing for and you could see Barcelona were not comfortable each time they have the ball.

"The fact remains it is the end of a generation for Barcelona, they just need to see how they can bring in players.

"When you look at the age of those players also - from the defensive line to the offensive - age is not on their side.

"Bayern played well and they deserve the result they got".
Ex-Golden Eaglets and Flying Eagles coach Amunike was on the books of Barcelona for four years (1996-2000) and played three Champions League games, including the qualifying rounds, during his time with the club.
Ifeanyi Emmanuel
Photo Credit : fcbayern.com
Copyright ANS