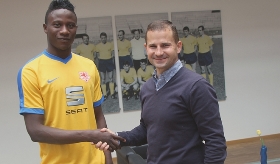 Allnigeriasoccer.com understands that newly promoted 2.Bundesliga outfit Eintracht Braunschweig are on the verge of announcing the signing of former Flying Eagles striker Suleiman Abdullahi.
Eintracht Braunschweig have reached an agreement with Union Berlin for the transfer of the promising forward.
Abdullahi will be spending the entirety of the 2020-2021 season on loan at Eintracht Braunschweig.
The 23-year-old is returning to Eintracht Braunschweig for a second spell as he was on the books of the Lower Saxony club for three years before transferring to Union Berlin in the summer of 2018, first on loan before the move was made permanent the following season.
In his first stint at the Lions, he had a direct hand in 14 goals (8 goals, 6 assists) from 43 appearances in all competitions.
Abdullahi made his German Bundesliga debut on the opening day of last season against RB Leipzig and went on to play five more matches before the season ended, scoring once.
Eintracht Braunschweig sealed promotion to the second-tier by finishing third in the 3.Liga last term.
Ifeanyi Emmanuel
Copyright ANS