Subscribe
'The New Coach Did Not Want Me' - Moses Ogbu Opens Up On Why He Left Grimsby Town
Published: August 15, 2020 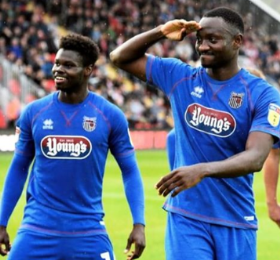 Moses Ogbu has finally broken his silence on the real reason he departed English Football League Two club Grimsby Town in the January transfer window.
The Mariners terminated the contract of the striker by mutual consent, five months before the original agreement between club and player was due to expire.
The official word from Grimsby Town was that the Nigerian terminated his contract because he was feeling homesick but there is a lot more to it than meets the eye.
"In the beginning it was nice, I got to live in a crazy big apartment. It was great fun to play in England, the football there was crazy… But in the end I injured my knee and the coach was fired. That's when everything started to happen," Ogbu said to Aftonbladet.
"I came back in December and then I was not allowed to play that much. I knew I was a starting player, and I wanted to play. It was frustrating.
"We talked through it and the new coach did not want me there. I should have started in that team every day of the week."
During his short time with the Mariners, Ogbu appeared in 25 matches, including against Chelsea in the third round of the Carabao Cup, scoring four goals.
Ifeanyi Emmanuel
Copyright ANS