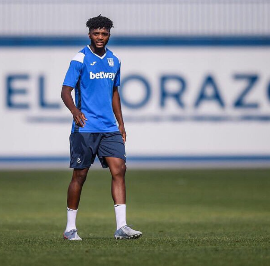 Turkish Cup winners Trabzonspor have pulled out of the race to sign Nigerian defender Chidozie Awaziem.
Trabzonspor, coached by former Chelsea midfielder of Nigerian descent Eddie Newton, looked to seal a deal for the Super Eagles star after he was proposed by his agent.
But the Board has not approved the signing citing the player's wage demands as a stumbling block, according to Turkish sports daily Fanatik.
Awaziem reportedly demanded one million euros (N540 million) a year to play for Trabzonspor next season.
The 23-year-old has to return to his parent club Porto and await further developments.
He has failed to establish himself as a regular after he was promoted to Porto's first team and was farmed out on loan to Nantes, Rizespor and CD Leganes in the last three seasons.
A member of the Super Eagles squads to the 2018 World Cup and the 2019 Africa Cup of Nations, his contract with Porto runs out at the end of the 2021-2022 season.
Igho Kingsley
Photo Credit : CD Leganes
Copyright ANS