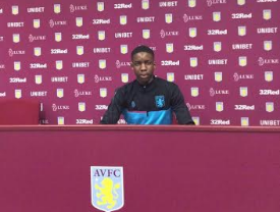 Allnigeriasoccer.com understands that English Premier League club Chelsea are mulling over a move for talented Nigerian teenager Paul Ibahadon.
The Blues talent spotters extensively scouted the central defender before inviting him to Chelsea's training ground for further assessment.
Chelsea youth team coaches ran the rule over Ibahadon on Friday morning when he took part in an in-house friendly involving the U16 team.
A ball-playing central defender who is composed, strong and quick, Ibahadon can also be utilized as a holding midfielder and has drawn comparisons with West Brom's Nigeria international Semi Ajayi.
Chelsea could be facing competition for the services of the promising youngster as Nottingham Forest, West Brom and Birmingham City have also shown interest in signing him.
A proposed move to Aston Villa fell through due to international clearance issues.
Three Nigeria-eligible players - goalkeepers Prince Adegoke and Kelechi Chibueze plus fullback Derrick Abu - played for Chelsea's U16 team last season but have been promoted to the U18s after signing scholarship deals ahead of the upcoming season.
Ifeanyi Emmanuel
Copyright ANS