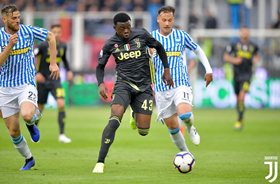 Two talented players of Nigerian descent are in line to face off when Real Madrid trade tackles with Juventus in the 'Champions League for Youth Teams', the UEFA Youth League on Sunday evening, allnigeriasoccer.com reports.
Spanish-born midfielder cum winger Marvin Akinlabi is among 21 Real Madrid players that traveled to Nyon in Switzerland, while Paolo Gozzi Iweru is available for selection, having been included in Juventus 24-man provisional squad list.
The two youngsters played key roles to help their clubs reach the last sixteen, with Iweru scoring two goals in four appearances in the group stage while Akinlabi was in action for 197 minutes spread across three games for Los Blancos.
The winner of the Juventus vs Real Madrid tie will play against the winner of the game between Inter Milan and Rennes in the quarterfinals on August 19.
Born in Torino, Iweru has made his professional debut for Juventus, against SPAL in a Serie A match back in April 2019, while Akinlabi has been spotted training with Real Madrid's first team on several occasions.
Super Eagles defender Ola Aina won the UEFA Youth League with Chelsea in 2015 and 2016.
Igho Kingsley
Photo Credit : juventus.com
Copyright ANS