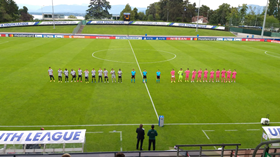 There will be only one Italian representative in the quarterfinals of the UEFA Youth League after Juventus crashed out of the competition following their 3-1 loss to Real Madrid in Nyon on Sunday evening, allnigeriasoccer.com reports.
The Juventus squad was captained by central defender of Nigerian descent, Paolo Gozzi who has earned over 40 caps for Italy's youth teams, while Spanish-born winger Marvin Akinlabi entered the game as a substitute in the 65th minute.
Real Madrid qualified for a record sixth quarterfinal and they did it the hard way as they were a goal down and a man down after 11 minutes but they responded superbly, scoring three goals without reply.
Juventus got the opening goal from Franco Tongya inside two minutes but the young Bianconeri allowed their advantage to slip away.
Sergio Arribas restored parity for Los Blancos at minute 30; there was a a collision between Gozzi and a Real Madrid player in the build-up to the equaliser, and the Italian-Nigerian was shown a yellow card for a high boot.
The Italians trailed by two goals to one at half-time, with Carlos Dotor netting for the Spanish side in the 32nd minute.
Real Madrid striker Juan Latasa made it 3-1 with an outstanding goal in the 57th minute after brushing aside Gozzi.
The quarterfinal between Inter Milan and Real Madrid will take place on Wednesday, August 19.
Ifeanyi Emmanuel
Photo Credit : juventus.com
Copyright ANS