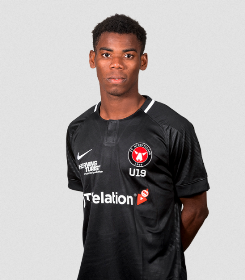 FC Midtjylland's Nigerian center back Raphael Onyedika Nwadike will come under intense scrutiny when the Danish side face off with Ajax Amsterdam in the quarterfinal of the UEFA Youth League on Tuesday afternoon, allnigeriasoccer.com reports.
Barring an injury in the warm-up, Onyedika will feature against the famous Dutch club as he has been named in the starting lineup by manager Henrik Jensen.
And he is set to face the prolific Ajax Amsterdam striker Sontje Hansen, who starts for Ajax Amsterdam U19s, in an individual duel.
Hansen single-handedly knocked out the Golden Eaglets from the 2019 FIFA U17 World Cup, scoring three goals in a 3-1 loss by the five-time world champions who exited the tournament in the last sixteen.
The 18-year-old Hansen was rewarded with a first-team debut after the tournament in Brazil, where he won the Golden Boot award with six goals and three assists.
Onyedika has been impressive for FC Midtjylland enroute the quarterfinal, going the distance in all their six matches so far and helping the club keep three clean sheets.
Last month, the 2001-born defender inked a multi-year contract with Midtjylland until the end of the 2024-25 season.
Igho Kingsley
Photo Credit : fcm.dk
Copyright ANS