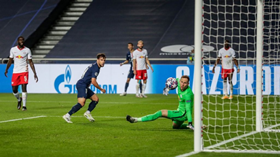 Ademola Lookman was a non-playing substitute as RB Leipzig were beaten 3-0 by Paris Saint Germain in their UEFA Champions League semi-final meeting in Lisbon on Tuesday evening, allnigeriasoccer.com reports.

The 22-year-old winger who has only made one appearance in the competition this season was left on the bench by manager Julian Nagelsmann for the entirety of the game which saw Marquinhos, Angel Di Maria and Juan Bernat net the goals for the Ligue 1 club.

Marquinhos opened the scoring when he guided home a brilliant header following Di Maria's pinpoint cross in the 13th minute before the Argentine doubled the lead three minutes shy of the break, tucking home a precise pass from Neymar.

Bernat made it game, set and match when he beat Peter Gulacsi with yet another sensational header in the 56th minute to ensure the Parisians 50-year wait for a Champions League final was over.

The winner between Joshua Zirkzee and Jamal Musiala's Bayern Munich versus Lyon tomorrow will thus, face PSG in the competition's showpiece on Sunday, August 23.