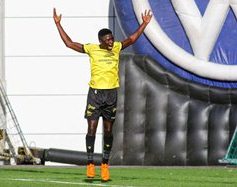 Sports director of German 2. Bundesliga side St. Pauli, Andreas Bornemann has confirmed that they are interested in signing former Nigeria U20 international Afeez Aremu.
Norwegian media reported that the IK Start holding midfielder is already in Germany for a medical checkup but Bornemann has denied that the transfer is a done deal as negotiations over a transfer fee are still ongoing.
"He has a profile that would suit us well. He is an interesting player who, despite his young age, has a lot of experience. He's a six and has played many games in this position," said Bornemann to Hamburger Morgenpost.
Andreas Bornemann went on to highlight the qualities of Aremu and noted that the Nigerian has several games under his belt in the Norwegian Leagues.
"He is very athletic, has good physicality and an aggressive duel. He has already played over 70 games, which is a real good number in Norway too."
A member of the Flying Eagles squad to last year's U20 Africa Cup of Nations, Aremu has been playing for IK Start since January 2018 after stops at Sunshine Stars, Rivers United and Akwa United.
Igho Kingsley
Copyright ANS