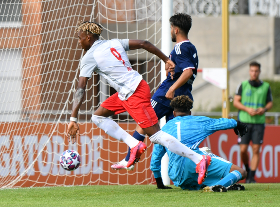 2017 winners Red Bull Salzburg have joined Ajax Amsterdam and Benfica in the semifinals of the Champions League for youth teams, UEFA Youth League following their 4-3 victory against Lyon on Wednesday afternoon, allnigeriasoccer.com reports.
Three players of Nigerian descent started for the Austrian side - Bryan Okoh, Karim Adeyemi and Chukwubuike Adamu - and played key roles in the win, with the Red Bull Salzburg number 9, who was born in Nigeria, bagging an 11-minute treble.
Soumare headed Lyon in front after 30 minutes but the lead lasted nine minutes as Okoh headed home a corner to make it 1-1, before Adamu scored with another header to make it 2-1 on the stroke of half-time.
It was 3-1 in the 54th minute courtesy of Adamu and he got his hat-trick a minute later, taking his tally in this season's competition to six goals from six appearances.
Germany youth international Adeyemi provided two assists for the goals scored by Adamu in the second half.
Da Silva and Wissa netted for the French team in the 71st and 78th minute respectively but they were prevented from scoring again.
Salzburg will face the winners of the Inter vs Real Madrid clash in the semi-finals on Saturday, August 22.
Igho Kingsley
Photo Credit : uefa.com
Copyright ANS