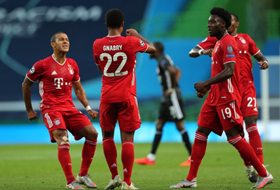 Bayern Munich are through to the final of this season's UEFA Champions League after beating Lyon 3-0 in their semi-final clash in Lisbon on Wednesday evening, with NFF target Joshua Zirkzee watching proceedings from the bench for the entirety of the game.

While manager Hans-Dieter Flick named striker Zirkzee among the substitutes at the Estadio Jose Alvalade, midfielder Musiala was entirely omitted from the matchday squad.

Serge Gnabry gave Bayern the lead after 18 minutes when he beat Lyon goalkeeper Anthony Lopes with a reaping shot into the top-left corner from outside the box.

The former Arsenal striker will then get his second in the 33rd minute, tapping home from a rebound after Lopes and the Lyon defence had failed to properly clear their lines.

And Robert Lewandowski will seal the tie two minutes from time with his 55th goal of the season when he rose highest in the box to direct an inswinging cross from Joshua Kimmich home.

While Zirkzee will hope to make his second appearance in the competition for the Bavarians when they face Paris Saint Germain in the final on Sunday, Musiala will be relishing an unlikely first-team debut for the German Bundesliga champions.