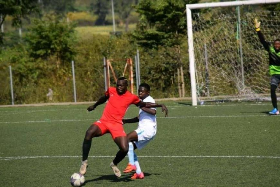 Allnigeriasoccer.com can exclusively report that two promising Nigerian teenagers will begin trials with Antalyaspor in the coming weeks with a view to signing contracts with the Turkish Super Lig side.
Solomon Zikeyi and Godwin Emeka have both been issued visas to Turkey and will jet out to the European nation via Cotonou on August 30.
Born October 10, 2001, Zikeyi is a product of Sidos Academy which produced ex-Golden Eaglets winger Akinkunmi Amoo, and the holding midfielder has been likened to Leicester City star Wilfred Ndidi due to his playing style.
Born July 2, 2001, Emeka is currently on the books of Dosad Football Academy, and has been described as a striker in the mould of Manchester United's Odion Ighalo.
The two teenagers were selected out of a pool of more than one thousand players that attended a talent scouting programme in Anambra State before the coronavirus pandemic.
Their imminent trials with Antalyaspor was arranged by influential Turkish intermediary Haci Mehmet Karabas in partnership with former Enyimba captain Dominic Egbukwu.
Ifeanyi Emmanuel
Copyright ANS