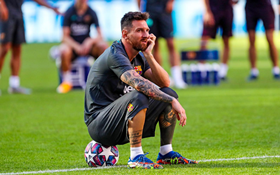 Former Barcelona right-back Gbenga Okunowo has advised Lionel Messi to stay at least two more years with the Blaugrana amid speculation linking the Argentina superstar with possible moves to Inter Milan and Manchester City in the summer transfer window.
Speculations continue to grow about the future of Messi following Barcelona's humiliating 8-2 loss to Bayern Munich in the quarterfinals of the Champions League which left him devastated.
Asked to react to reports linking Messi with Inter and Man City, Okunowo, who is currently in Spain, told allnigeriasoccer.com : "They said he wants to change clubs. For me, Messi is 33, my own advice is for him to stay for two more years and he can finish like a legend of Barcelona.

"We've seen everything about Messi, what else does anybody want to see in another club, unless he wants to go to another country.

"He should stay, if he's satisfied he can retire or if he wants to be playing in those Asian countries or anywhere, like a legend, he can do that.
"But for me, he has to stay for that two years and let everybody appreciate him."
Barcelona are looking to rebuild their squad and have appointed their legendary defender Ronald Koeman as their new coach while Eric Abidal resigned as technical secretary.
Okunowo believes that it is important that Barcelona retain the services of some of their key players for next season.
"They are making the arrangements, the team now needs a lot of reshuffling, they have to bring in new players.
"Age is telling on some of the players now, that's the instruction from the club, they see that these players have to be changed.

"They have already changed the coach, the players that the new coach sees are good for him, he'll allow them stay, the ones not good for him will surely go, that's what is happening at the moment.

"My own opinion, it is good like that because you cannot change the whole team, you have to wait. In our Nigeria, everybody understands the way we change our national team - it is not good.

"You have to change players gradually not everybody at the same time because the ones coming in have to learn from the old ones."
Lionel Messi joined Barcelona from Newell's Old Boys in his native Argentina at the age of 13, and has an incredible 634 goals to his name from 731 appearances in all competitions.
Ifeanyi Emmanuel
Photo Credit : fcbarcelona.com
Copyright ANS