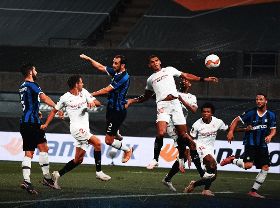 Victor Moses was a second-half substitute for Inter Milan in their 3-2 Europa League final defeat versus Sevilla at the RheinEnergieStadion in Köln on Friday evening, allnigeriasoccer.com reports.

The Nigerian came on for Danilo D'Ambrosio with 78 minutes on the clock but fell short in helping his side rescue the game.

The Chelsea loanee could have become the first Nigerian player to win the Europa League in its various guises with two different clubs, but that history will remain untouched for now.

Romelu Lukaku put the Italian team one nil up after just five minutes when he scored from the spot after he was fouled in the area by Diego Carlos, but Luuk De Jong leveled the scores eight minutes later when he powered home a brilliant header from Jesus Navas's cross.

De Jong will beat Samir Handanovic yet in the 33rd minute, this time profiting from a free-kick from Ever Banega to score another decent headed goal.

Diego Godin pegged Sevilla back with his own header two minutes later courtesy of a Marcelo Brozovic freekick.

However Carlos's acrobatic kick in the 74th minute ultimately handed the La Liga side the victory on the night and a record sixth success in the competition.