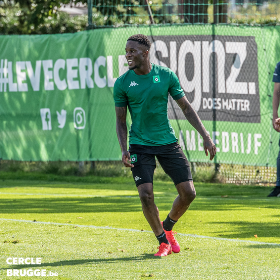 Young Chelsea striker Ike Ugbo has made his full competitive debut for Cercle Brugge, four days after joining the Belgian First Division A side on a season-long loan deal, allnigeriasoccer.com reports.
Against Mechelen at the AFAS-stadion Achter de Kazerne, Cercle Brugge coach Paul Clement has put his faith in Ugbo, naming him in the starting lineup after few training sessions with the his new teammates.
The Chelsea loanee will be aiming for a winning start to his First Division A debut, something he has not previously managed in his professional career.
Ugbo ended up on the losing side when he made his EFL Championship debut during a loan spell at Barnsley in August 2017 and a Milton Keynes Dons side were narrowly beaten 2-1 by Northampton Town on his League One debut in January 2018.
Last season, Roda JC were thrashed 4-0 by FC Volendam in the striker's maiden appearance in the Dutch Keuken Kampioen Divisie.

For the remainder of the 2020-2021 season, the former England U17 international has been assigned the number 22 jersey at Cercle Brugge, who are seventh in the provisional standings.
Ifeanyi Emmanuel
Photo Credit : cerclebrugge.be
Copyright ANS