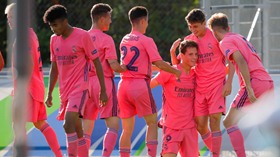 Real Madrid are through to their first-ever UEFA Youth League final after beating Red Bull Salzburg 2-1 on Saturday evening, allnigeriasoccer.com reports.
Four Nigeria-eligible youngsters were on show at the Centre sportif de Colovray in Nyon, with Chukwuibuike Adamu, Bryan Okoh and Karim Adeyemi starting for Red Bull Salzburg, and Marvin Akinlabi for the Spanish side.

In the quarterfinals, Adamu stole the headlines with a 12-minute hat-trick against Olympique Lyonnais but the Nigerian-born Austrian U19 international was well marshaled by the Real Madrid defenders today.

Real Madrid pounced in the 4th minute, Latasa guiding the ball in beyond goalkeeper Antosch, assisted by Marvin Akinlabi, who showed good awareness to tee up the number 9.

Four minutes into the second half, Adeyemi went on a mazy run and won a penalty for his side after a robust challenge by Santos.


Sucic converted from the spot to halve the deficit but the comeback Red Bull Salzburg were expecting never happened.
Of the four players of Nigerian descent that started the game, only Adamu went the full ninety.
Real Madrid will face Benfica, who thrashed Ajax Amsterdam 3-0 in the other semifinal, in Tuesday's showpiece.