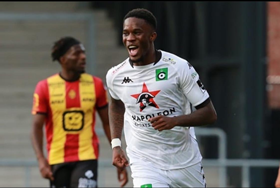 Nigerian striker Ike Ugbo has taken to social media to react to scoring on his Belgian First Division A debut for Cercle Brugge as they registered a hard-fought 3-2 win over Mechelen at the AFAS-stadion Achter de Kazerne on Saturday evening, allnigeriasoccer.com reports.
Just few days after his signing was announced by the West Flanders club, the Chelsea loanee was handed his full competitive debut and was in action for 67 minutes.
Writing on Instagram, Ugbo said : "First goal for @cercleofficial & 3 points on the roaddddd 🚘 #ugzzz".
If trivia is your cup of tea, this is the first time in Ugbo career's that he has ended up on the winning side on his league debut, having lost in his first appearances in the Championship, League One and Dutch Keuken Kampioen Divisie with Barnsley, MK Dons and Roda JC respectively.
The home team took the lead in the 37th minute, but the game turned on its head in the space of three second half minutes when Ugbo headed home the equaliser in the 54th minute before Hotic made it 2-1.
Mechelen leveled through a Vranckx goal in the 64th minute but the visitors secured all three points thanks to an 80th minute strike from Thibo Somers, who replaced Ugbo in the second half.
Ifeanyi Emmanuel
Photo Credit : cerclebrugge.be
Copyright ANS