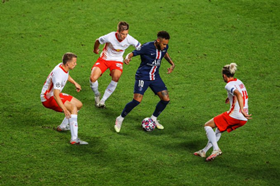 Bayern Munich face Paris Saint-Germain in the UEFA Champions League final at the Estádio do Sport Lisboa e Benfica in Lisbon, Portugal on Sunday evening.
Nigeria manager Gernot Rohr is certain to monitor proceedings as he has a past with Bayern Munich, representing the Bundesliga champions from 1972 to 1974 and has a German and French passport.
PSG boast three of the most eye-catching strikers in the world in the shape of Neymar, Angel di Maria and Kylian Mbappé, who have the ability to break defences with their pace, dribbling and directness.
Asked how Bayern Munich can stop PSG fast strikers Neymar, Mbappe and di Maria, Rohr told Abendzeitung Munchen :"These are big names on the offensive. Neymar and Mbappé have to be disturbed while controlling the ball so that they cannot turn.
"You always have to be close to them, ideally with several players. Overall, it would be good for Bayern not to be as high in defense as they were last time. But Flick must have recognized that too."
Rohr believes it will be an advantage for Bayern Munich to have Benjamin Pavard in the starting lineup following his recovery from a foot injury.
"If Pavard is one hundred percent fit, he can stabilize the defense. Against Lyon you saw that Bayern had a few problems at the back.
"Lyon really has specialists in countering in its team. I think Flick will react to this so as not to be countered too often against Paris," added Rohr.
Neymar, Mbappe and di Maria have scored 61 goals between them in all competitions for PSG in the 2019-2020 season.
Ifeanyi Emmanuel
Photo Credit : psg.fr
Copyright ANS