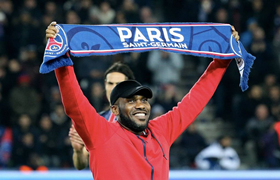 Former Paris Saint-Germain midfielder Jay-Jay Okocha has shared words of encouragement for the Ligue 1 club ahead of their Champions League final meeting with Bayern Munich on Sunday evening, allnigeriasoccer.com reports.
The French club's Twitter handle posted a video of the Nigerian congratulating the Parisians for making it to the tournament's showpiece, and wishing them good luck when they tackle their German opposition at the Estádio do Sport Lisboa.
The Super Eagles legend was on the books of PSG from 1998 to 2002 but he is fondly remembered in German football for the wonder goal he scored for Eintracht Frankfurt against ex-Bayern Munich goalkeeper Oliver Kahn who was defending the colours of Karlsruher SC during the 1992-93 Bundesliga season.

Okocha left Karlsruher defenders dazed in the goal, as well as repeatedly rounding Kahn before slotting home to leave the German red-faced.

Below are some comments from Twitter as fans recounted the incident.

@itsLycanAlpha: I'm waiting for the clip where he Embarrassed Kahn. Somebody do the honours

@chimezieatasie: @IAmOkocha will always remain my best African player forever .....The guy is a Legend

@ideco001: How was he able to take that shot from that distance? Tuale!

@AgainztAllOdds: I'll share this a thousand and one times anytime I see it.

@Akpan_Peters: 🤣🤣🤣🤣🤣🤣🤣 only neymar would possibly do this today

@shedy88: I know one player who can replicate this tonight - Neymar Jr. Alé Paris 💪

@joewee_igwe: Kann pratically slept on the ground and used the opportunity to rest a little 😅😅😅😀😀

@MdeenOlawale: He was so good they had to name him twice 😂


@BenZiMoha: This guy was such a king that people literally bow down for him whenever he touches the ball 😂😂
Emmanuel Chinaza
Photo Credit : psg.fr