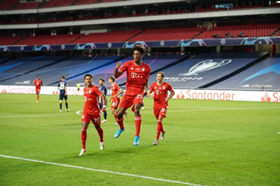 Bayern Munich have won the biggest prize in club football, the UEFA Champions League following their 1-0 victory over Paris Saint Germain in the final of the competition held at the Estádio do Sport Lisboa on Sunday evening, allnigeriasoccer.com reports.
While Joshua Zirkzee will watch proceedings from the bench for the entirety of the game, his compatriot Jamal Musiala was omitted from the matchday squad for the German side.

Aged 17 years and 179 days, the attacking midfielder would have became the youngest Nigeria-eligible player to feature in a Champions League/European Cup final if he was handed his debut in the competition here.

On Zirkzee's part, the striker will finish the season with a solitary appearance in the competition, having came on as an 86th minute substitute for Ivan Perisic in the 3-1 over Tottenham in the group stages.


Kingsley Coman headed home from a Joshua Kimmich cross to give Bayern the lead in the 59th minute, and it stood that way till the blast of the final whistle to hand Hansi Flick's side the title.
Emmanuel Chinaza
Photo Credit : fcbayern.com
Copyright ANS