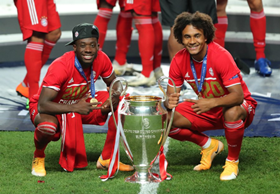 Newly-crowned European champions Bayern Munich have taken to social media to share a photo of Dutch-born striker of Nigerian decent, Joshua Zirkzee posing with the Champions League trophy in the wake of their 1-0 win against Paris Saint Germain on Sunday evening, allnigeriasoccer.com reports.
Bayern Munich coach Hansi Flick used his third sequence of substitutions when be brought on Corentin Tolisso to replace Thiago Alcantara, leaving the Dutch-Nigerian rooted to the bench for the entirety of the game.
Bayern posted on Twitter : "Nothing to see here, just two 19-year-olds chilling with the Champions League trophy 👦🏆".
Zirkzee played a minor role leading up to the Champions League final, making his debut when he came off the bench for the last four minutes at home against Tottenham Hotspur in the group stage.
Apart from today's game vs PSG, the Netherlands U19 international was a non-playing substitute in knockout games against Chelsea (away), Barcelona and Lyon and missed the home leg against the Premier League team due to injury.
If Zirkzee had featured vs the Parisians, he would have joined a prestigious list of past Nigerian winners which includes John Obi Mikel, Nwankwo Kanu and Finidi George who all played in the Champions League showpiece.
Ifeanyi Emmanuel
Photo Credit : fcbayern.com
Copyright ANS